Quality On Trial – Dodge vs. Vortex 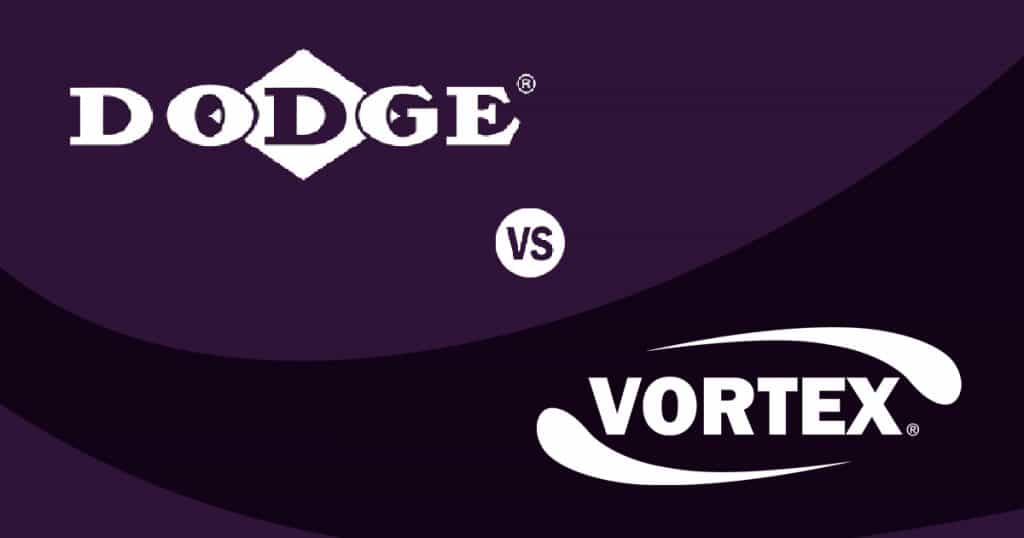 Dodge is a well-known name in shaft-mount speed reducers in the United States, but are they the best? This video will explore the differences between Vortex Shaft Mount Speed Reducers and the Dodge equivalent to determine how the two brands compare in terms of quality.

Shaft mount reducers are often subjected to the elements – working long hours with varying loads. Because of these factors, some amount of housing expansion, contraction and flexing is to be expected. These variances generally lead to one big problem… leaking. Leaking leads to the number-one cause of failure in this type of reducer – insufficient lubrication.

Let’s see how each manufacturer addresses the problem of leaking and see how they compare.

Both manufacturers use spring-loaded, double-lip seals. Dodge uses a seal with a metal case that’s coated in an acrylic paint. The coating helps prevent leaks around the outer diameter of the seal. 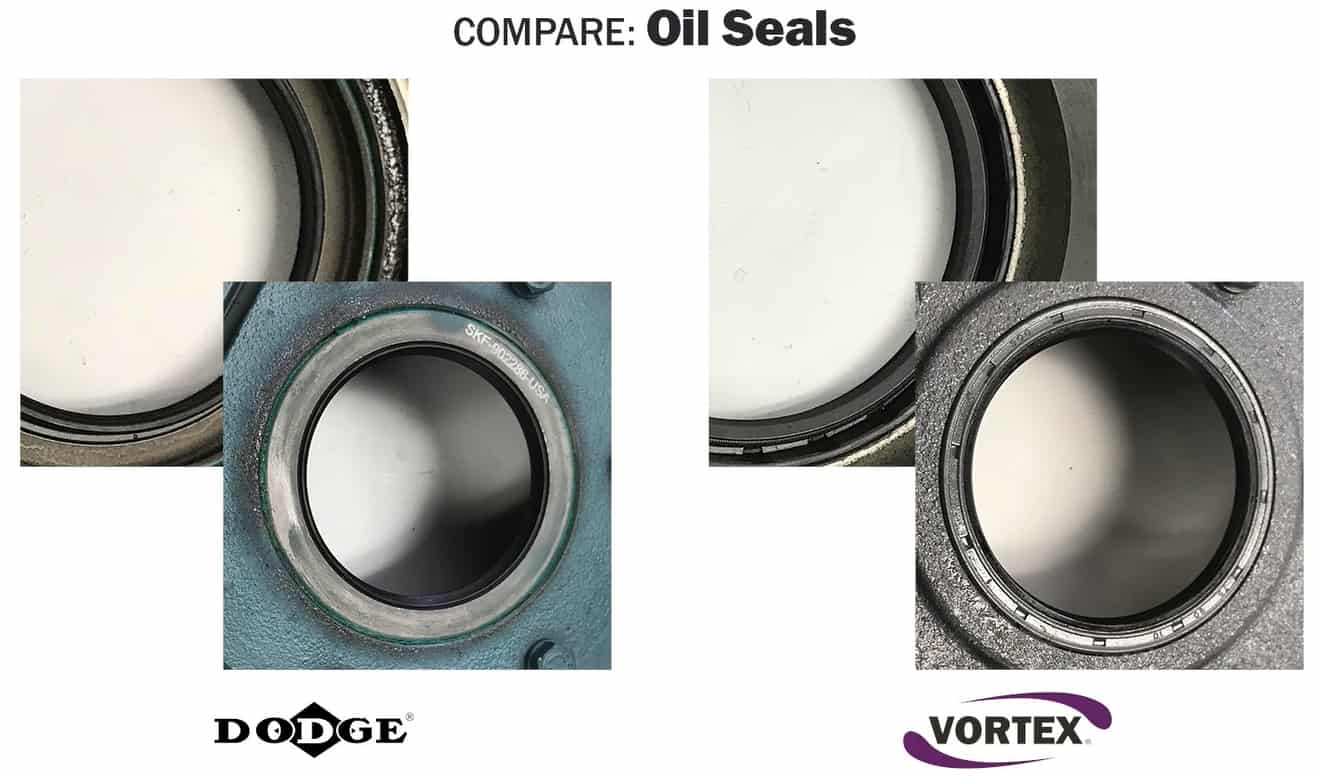 A speed reducer’s housing is made up of two pieces that are clamped tightly together, creating a large seam. This seam runs around the entirety of the reducer and is often susceptible to leaks. One way to minimize the leakage risk is to focus on the surface finish of the mating halves. 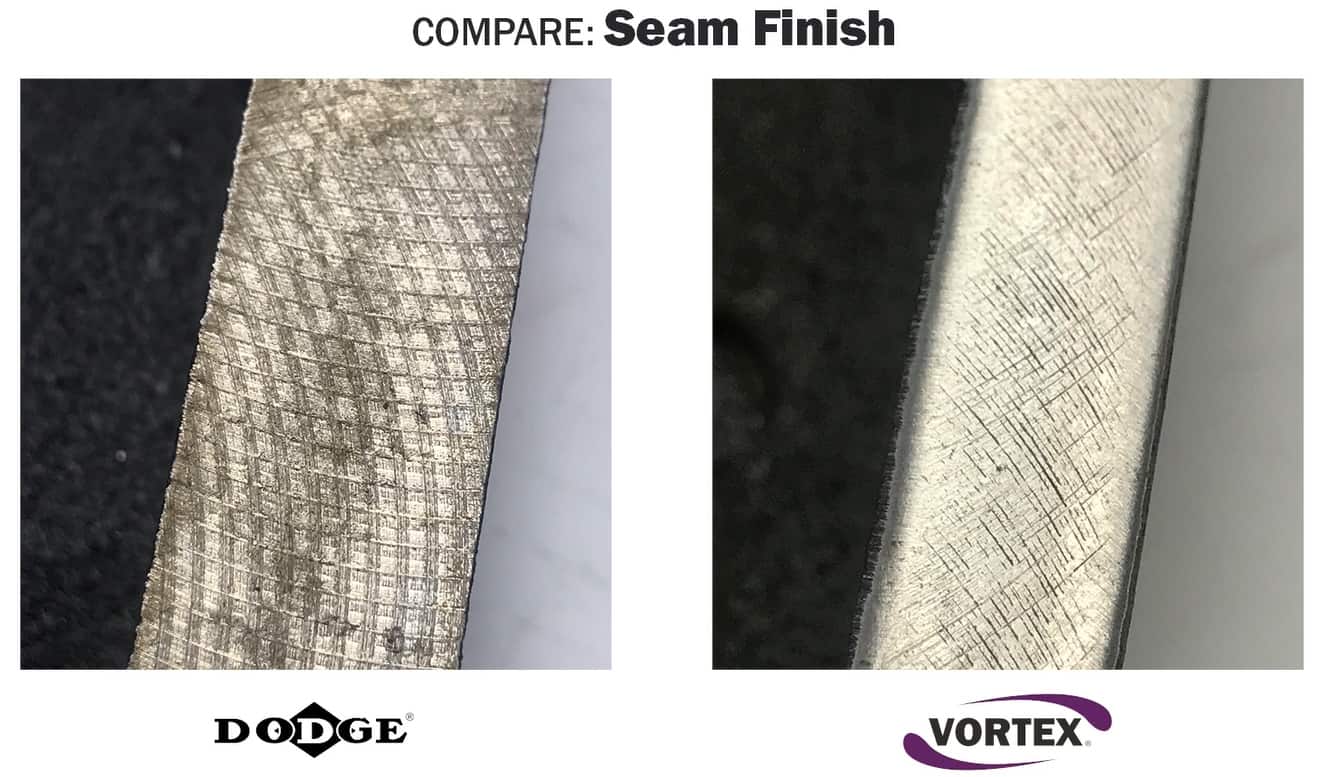 In these unretouched photos, we’re comparing Dodge and Vortex. The seam finish inside the Dodge TXT315 is shown on the left. The Vortex VXT315 is on the right. Given what you see here, which speed reducer is more likely to leak? Which provides better long-term value?

Minimizing temperature-induced expansion and contraction is another way to reduce the potential for seam leakage. While the inside of the Dodge reducer is nice and clean, the gussets built into the Vortex reducer add strength and fight housing flex – keeping the risk of seam leakage to a minimum. 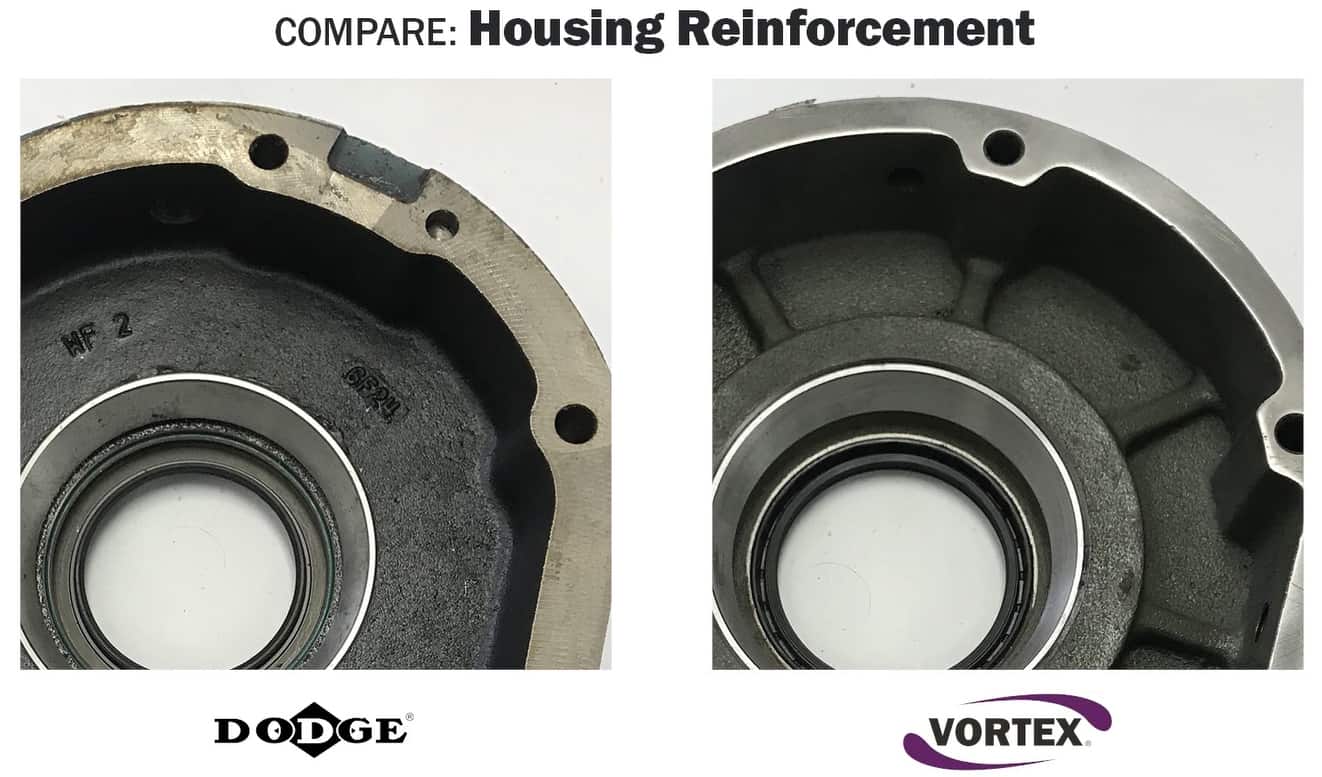 We’ve explored a number of quality features used to minimize leakage and increase speed reducer life. However, these features are meaningless without precision assembly at the factory.

Vortex speed reducers are pressure and run tested at the factory, ensuring that only problem-free boxes leave the plant. In run-testing the reducers before their departure from the factory, they are ensured noise-free operation upon initial start-up. Noise, like heat and vibration, is a signal that something is wrong. These tests are part of our focus on quality, and we take it seriously.

Wondering about Dodge? Well, we searched for information regarding Dodge and pressure or run testing. If they regularly test, they’re certainly not telling people about it. Although it is possible that Dodge conducts pressure and run testing, we did not find any mention of it in their published material. 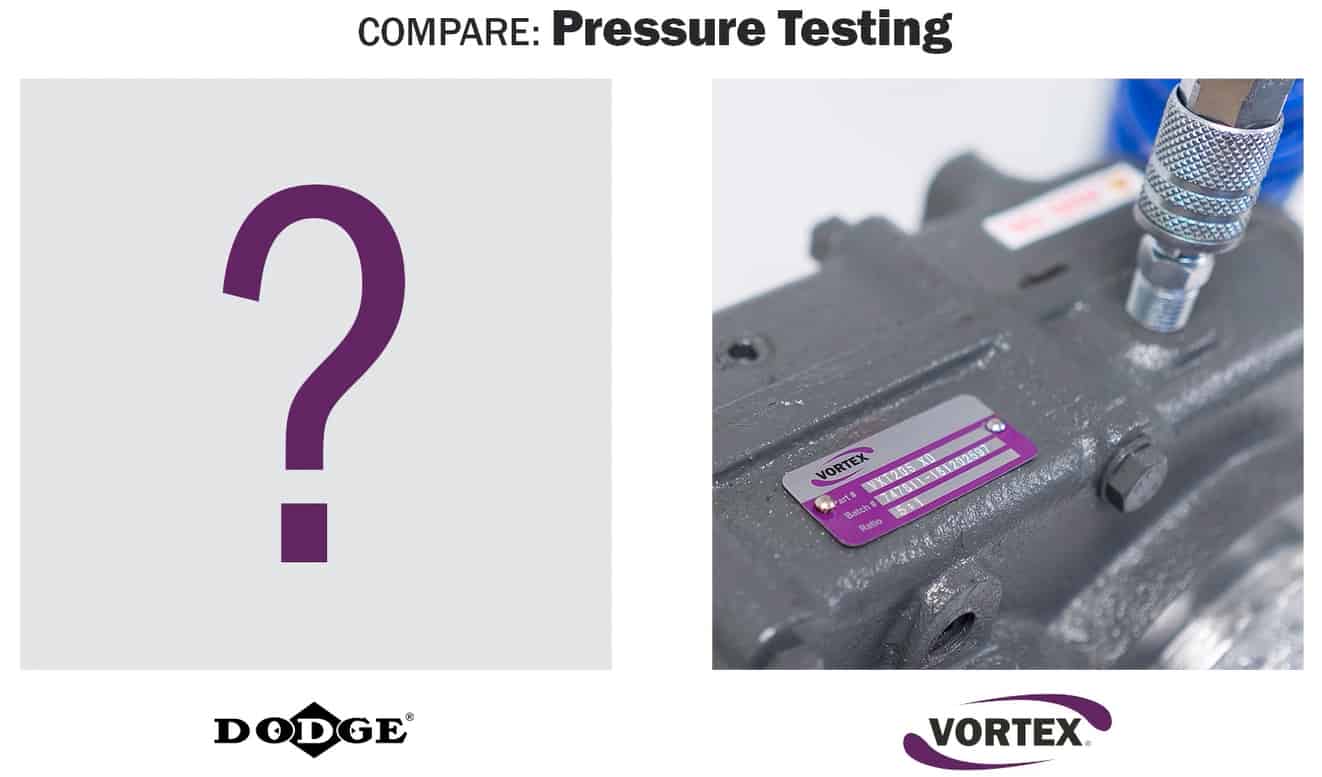 Preventing failure from leakage is pretty important, but is it the only point to consider? We don’t think so. Let’s look at the other aspects that make up quality construction.

The bearings in both Dodge and Vortex speed reducers are similar in size and capacity, as one would expect. However, the bearing seats in the Dodge 315 reducer are machined, while Vortex bearing seats are plunge ground. The peaks and valleys caused by machining can smooth over time causing a loosening between the bearing and shaft seat. By plunge grinding, the peaks and valleys are minimized creating a superior surface finish that ensures optimal bearing performance with a more precise bearing fit. 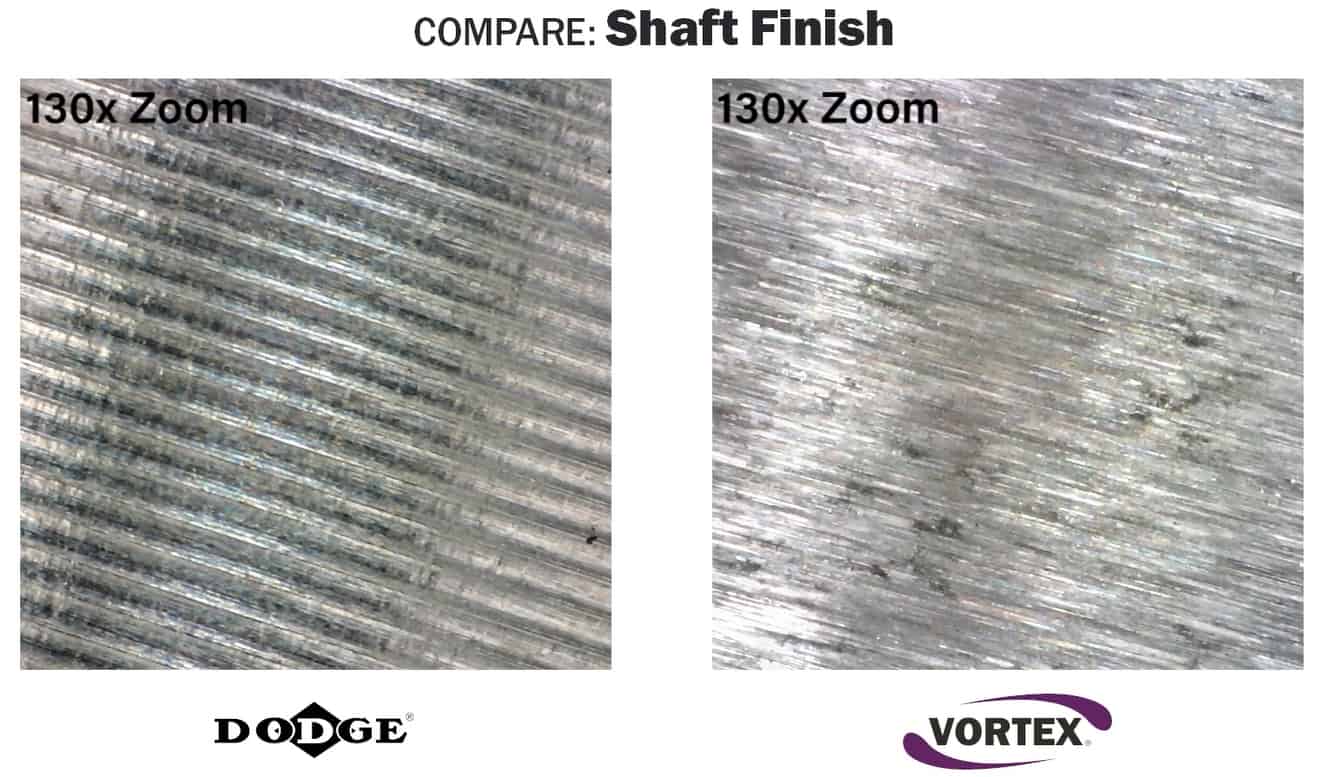 We examined the inside of both reducers closely. Both Vortex and Dodge appeared pretty clean. However, small shavings were evident inside the Dodge reducer. Shavings are not uncommon in production, but they do pose a hazard. If shavings lodge in a bearing or run through the gearing, for example, the results can be disastrous.

We’ve included a magnetic drain plug for Vortex reducers to eliminate this issue. The plug attracts loose magnetic material and wear particles in the oil, pulling it away from vital components and holding on to it until the next oil change. Just another way Vortex demonstrates our focus on overall quality.

We found the exterior of the Dodge and Vortex speed reducers to be comparable overall. However, we noticed a difference when we reviewed the output hub collar – the base for mounted accessories.

Curious about the difference this makes? We were too…so we conducted a simple test.

We firmly clamped each collar into a vice and hammered on it. Vortex’s solid steel collar eventually gave and bent as we pounded on it over time. The Dodge collar on the other hand…

The result of this simple test is obvious. Sintered steel parts may be cheaper to produce, but they simply can’t match the toughness and lasting quality of solid steel. Advantage – Vortex.

Shaft mount reducers have a tough job. They run continuously for hours while exposed to elements and in the most abrasive environments. Failure can cost thousands of dollars in maintenance and lost production.

Superior finishes, materials, and gussets give Vortex speed reducers a significant edge over the Dodge equivalent. Pressure and run testing at the factory – along with features such as fully rubber-coated seals, magnetic drain plugs, and solid steel collars – make Vortex the obvious choice for those interested in superior quality.

Which reducer would you stake your reputation on? Explore the Vortex resources that make designing a reducer easy.

What is Gearbox Service Factor? Why is it Important?

When Should I Change the Oil in My Reducer? 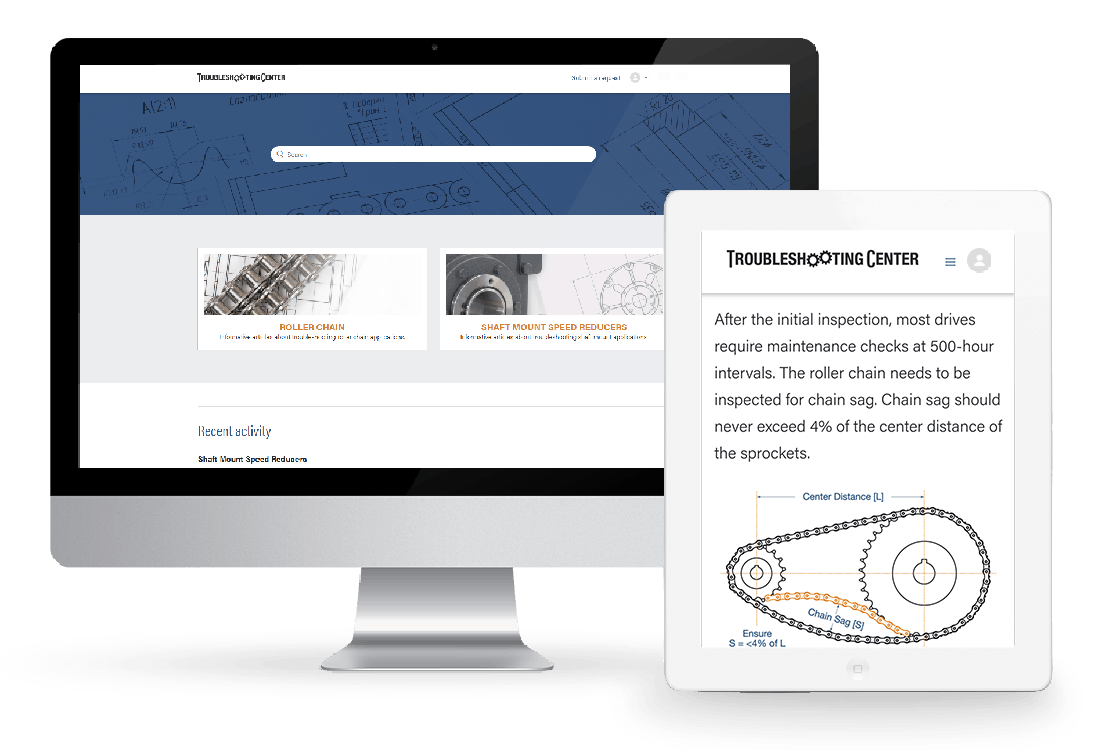 Problems with your application? Get answers here!

Excessive noise? Vibration? Unexpected issue you can’t figure out or solve? Our exclusive Troubleshooting Center has the information and engineering advice you need to solve even your most challenging issues. Trust us to get your application running smoothly!

Any cookies that may not be particularly necessary for the website to function and is used specifically to collect user personal data via analytics, ads, other embedded contents are termed as non-necessary cookies. It is mandatory to procure user consent prior to running these cookies on your website.